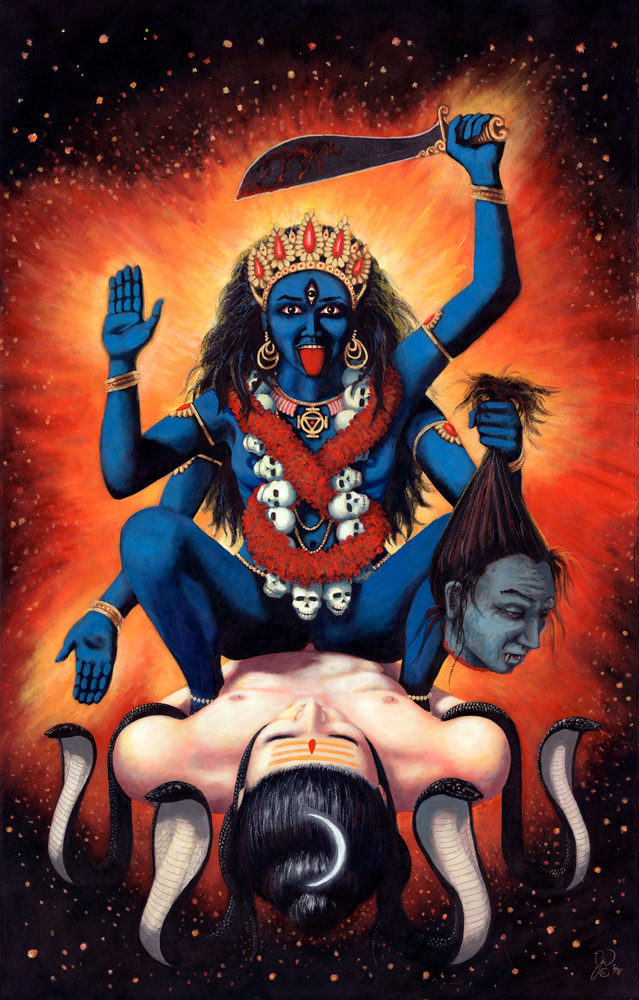 Kali is a Hindu Goddess who represents the dissolution of time-space into its timeless origin.  She sits upon the corpse of Shiva, who embodies the indestructible ground of awareness. Their union is the non-dual nature of Reality.

This image of Kali comes from the tantric school of Shaivite Yoga, around the 14th century, where She is Vishvamata, the Great Cosmic Mother. In tantric cosmology, the two primary principles of reality are Shiva and Shakti. Shiva is the passive male principle of awareness, and Shakti is the active female principle of energy and matter. Kali is the aspect of Shakti that destroys creation to reveal the eternal nature of things. On an individual level, She removes the obstacles that keep us from realizing our true nature. Thus, She is viewed as both terrible, for destroying what we cling to, and compassionate, for releasing us from illusion.

Her scimitar represents the wisdom to discriminate reality from illusion, severing the mind that is attached to the ego-body, which she holds as a demon head. Her garland of skulls is symbolic of the countless beings she has liberated from attachments to form.  Her right hand raised is the gesture of fearlessness, and her right hand lowered is the granting of boons.  Her necklace of fingers and blood-drenched tongue show how the consequences of all actions are absolved and consumed in the wisdom of eternal life. She is the color of midnight to symbolize the empty nature of all appearances.

Shiva lies beneath her in a state of suspended awareness, with a moon to signify his inward composure. He has transcended the passions, represented by the cobras around him.