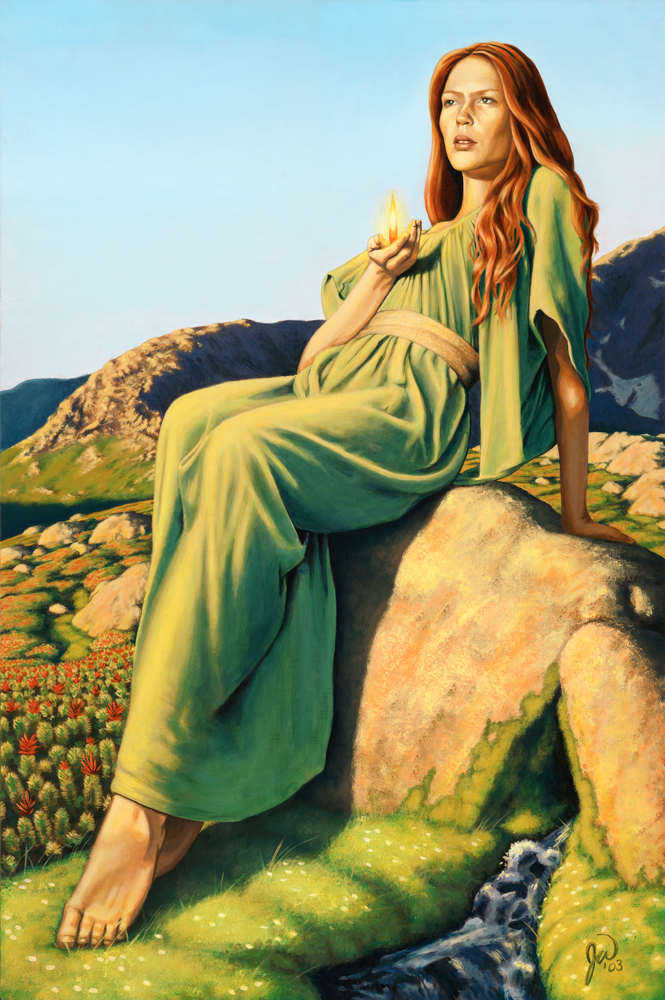 Brigit is one of the most universal goddesses of the Celtic pantheon. Originally she was worshipped as a sun goddess. She is viewed in three aspects; as maiden, mother, and crone. As a maiden, she is the fire of inspiration and poetry. As a mother, she is the fire of the hearth, and presides over midwives and healers. As a crone, she is the fire of the forge and patroness of smith craft and divination. Water sources such as wells or springs are sacred to her, for their healing and rejuvenating qualities.

In legend, Brigit is sometimes called the “Two-Faced One.” One side of her face is the ugly hag of winter, and the other is the fair maiden of spring. Each year she transforms winter into spring, honored at the druidic festival of Imbolc, February 2nd. In this image, she is represented as the fair maiden, holding the fire of inspiration and new beginnings.

The goddess Brigit was transformed into St. Brigit by the Catholic Church around 450 AD, as patroness and protector of home and cattle. Legend states that she was the midwife present at the birth of Jesus, placing three drops of water on his forehead. She is also called the “Foster-Mother of Christ,” for her role in saving the Child from Herod’s slaughter of male infants. She is thought of in folk tradition as a near-immortal being, like the Olympians were to the Greeks.

A perpetual flame burns in her honor at the sacred temple of Kildare, in Ireland.