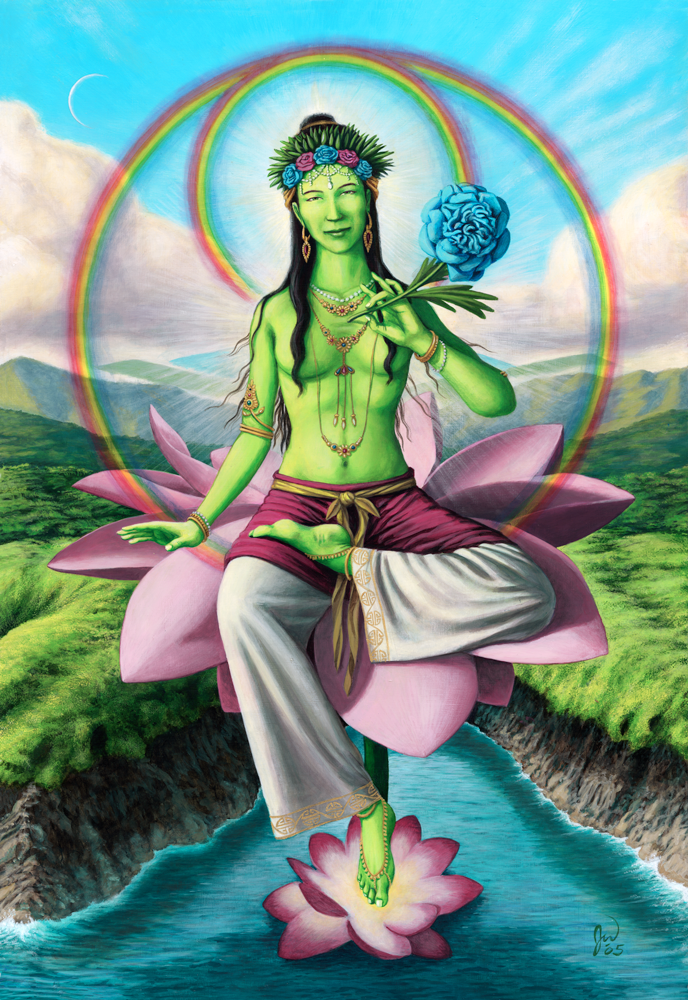 The goddess Green Tara represents compassionate action, protection, and enlightenment. She is one of the most popular deities of the Buddhist pantheon. The name ‘Tara’ is often translated as ‘star’ or ‘to cross’ which refers to her ability to guide sentient beings over the flood of suffering to safety and liberation.

The historical origins of Tara date her back to the 5th century in Eastern India. It seems that she arose in response to the male orientation of spirituality, and the need to adopt a more non-dual, or holistic path, which honored the divine feminine. Legend has it that Tara was once a princess who chose a spiritual life of service, but was told by male monks that she would have to be reborn as a man in order to reach enlightenment. Tara then made a vow to remain as a woman for lifetimes, assisting others on the path, and soon became recognized as a Buddha (awakened one) in her own right.

Another legend of Tara’s origin is that the Buddha of compassion, Avalokiteshvara, looked upon the world of humans and grieved over the immense suffering, confusion, and pain that he saw. He cried until there was a great pool out of which Tara emerged as a young woman, sitting on a lotus flower, ready to act for the benefit and guidance of all beings.

Her translucent green form reflects her role as a goddess of plants, healing, life, and growing things. It is also a color of the heart chakra; balance, harmony, kindness, and compassion. Though she inhabits a female form, and often that of a fair maiden, she can also be androgynous, symbolizing her non-dual nature and the enlightenment that sees beyond gender.

She is holding a blue peony flower that stems from her compassionate heart, which shows the gentle and wise nature of unconditional love and empathy, and her hand gestures the mudra of giving refuge. Her lowered right hand  displays the mudra of boundless giving. She sits on a lotus, signifying her pure nature as a Bodhisattva, enlightened being.