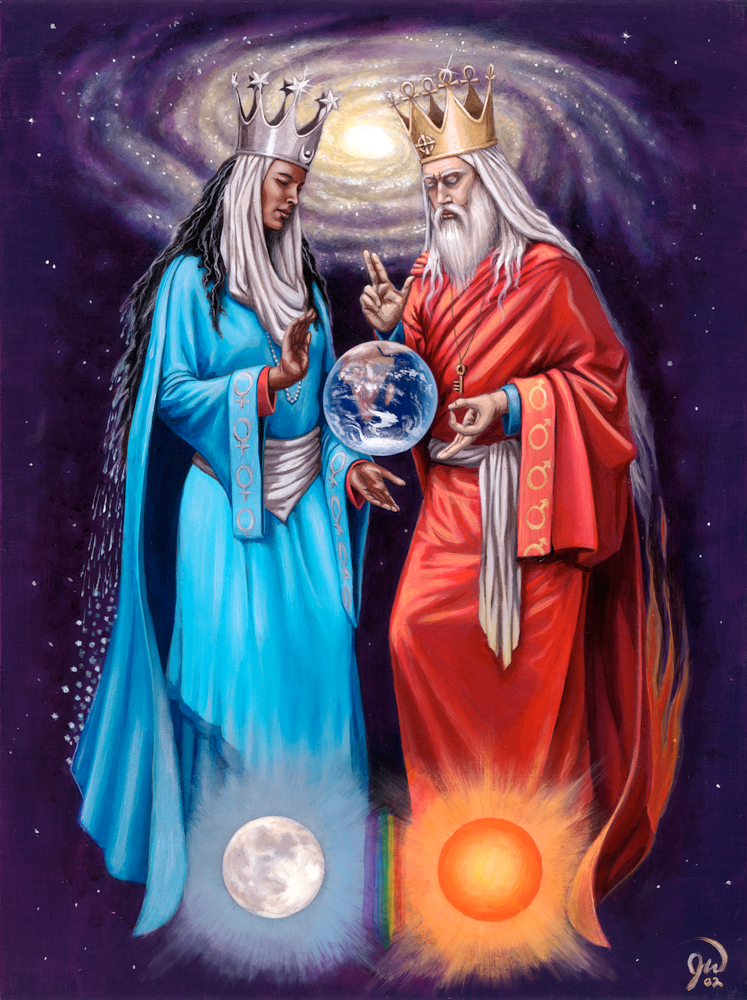 This painting represents the merging of five tarot images into a single vision of an enlightened king and queen healing the earth. Tarot cards are an ancient form of divination that incorporates images to relay hidden or esoteric meaning. The tarot images that were used are from the major arcana; the Emperor/ Hierophant, the Empress/ High Priestess, and the Universe cards.

A common theme in this picture is the balancing of opposites; the sun and moon, male and female, fire and water.  Like the black and white fish of the yin-yang symbol, both figures in this piece wear the color of the other on their inner blouse, representing the interconnectedness of life. This enlightened quality of balance and sameness is also expressed as equality, here symbolized as a rainbow connecting the sun and moon. An enlightened leader seeks to maintain this equality both within and in the society at large.

The merging of the Emperor with the Hierophant (priest), and the Empress with the High Priestess, is symbolic of the spiritual leader ideal; transcendent and enlightened, yet present and active.  The combination of the two together is the heart and mind working in unison toward the peace and harmony of all things.

The Universe card, illustrated by the vast galaxy and single planet earth, recalls the connection between macrocosm and microcosm; “as above, so below” is the meaning of the Emporer’s raised hand gesture. The principle of totality, including individuation and wholeness, is here represented.

This painting was commissioned by author Toni Gilbert, RN, MA, HNC, for the cover of her book “Messages From the Archetypes: Using Tarot for Healing and Spiritual Growth,” published by White Cloud Press, 2003