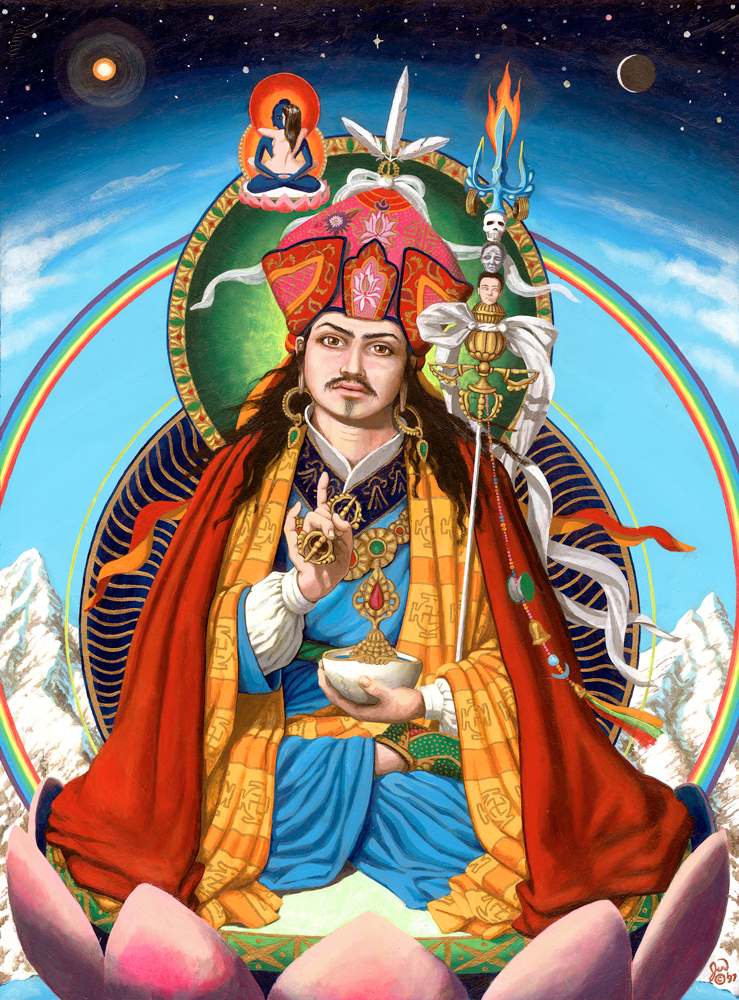 Padmasambhava, “the Lotus-born”, is revered in Tibetan Buddhism as one of its primary founders. He was born in the NW region of Kashmir around the 8th century, where he was shooled in the teachings of Buddhism, Indian Tantra, and Dzogchen. Renowned for his mastery of the teachings, he was called to Tibet at the request of the King, in order to establish a monastery there. The native shamanic religion of Bon had resisted the introduction of Buddhism in Tibet for centuries, but when Padmasambhava arrived, he displayed his miraculous siddhis, or powers, to transform the resistance of the elemental forces into the service and protection of Buddhism.

Padmasambhava is also called Guru Rinpoche, or “precious teacher,” for he embodies the awakened teacher within. The image of Guru Rinpoche is used as a foundation practice in Vajrayana Buddhism, and is rich with symbols to help guide the aspirant toward enlightenment. Such symbols include the three heads on the trident staff, which signify the three realms of existence: space, energy and form, corresponding to the mind, voice, and body. The yogi attempts to purify his nature on these three levels. The skull cup full of nectar represents the wisdom that transcends ego-identity and allows for boundless compassion. The vajra, in his raised hand, is a symbol for the indestructible and eternal nature of being, beyond pleasure or pain.

The Blue Buddha with Consort, called Samantabhadra, is the ultimate gound from which all things arise. Their union is the great balance of emptiness and form.