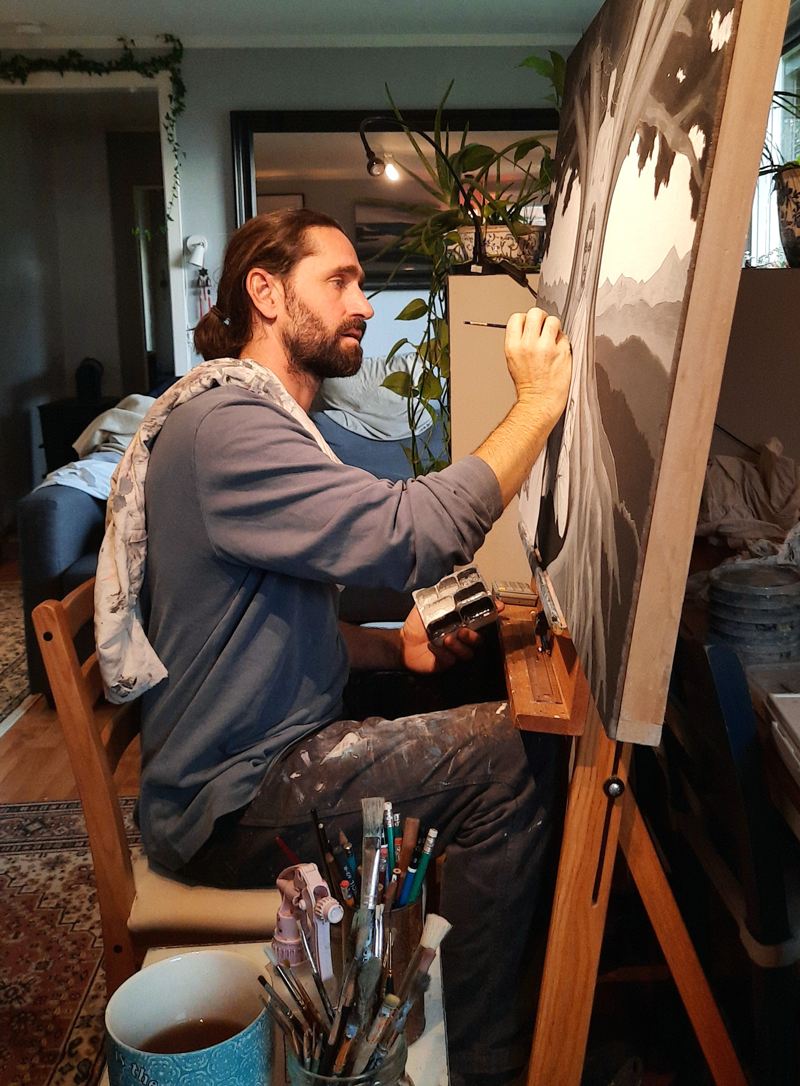 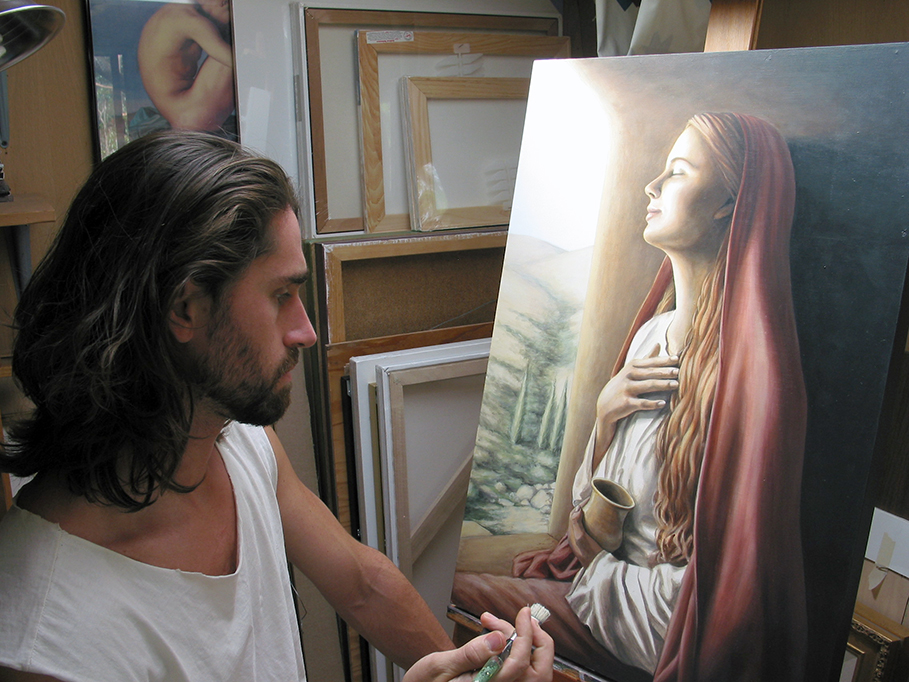 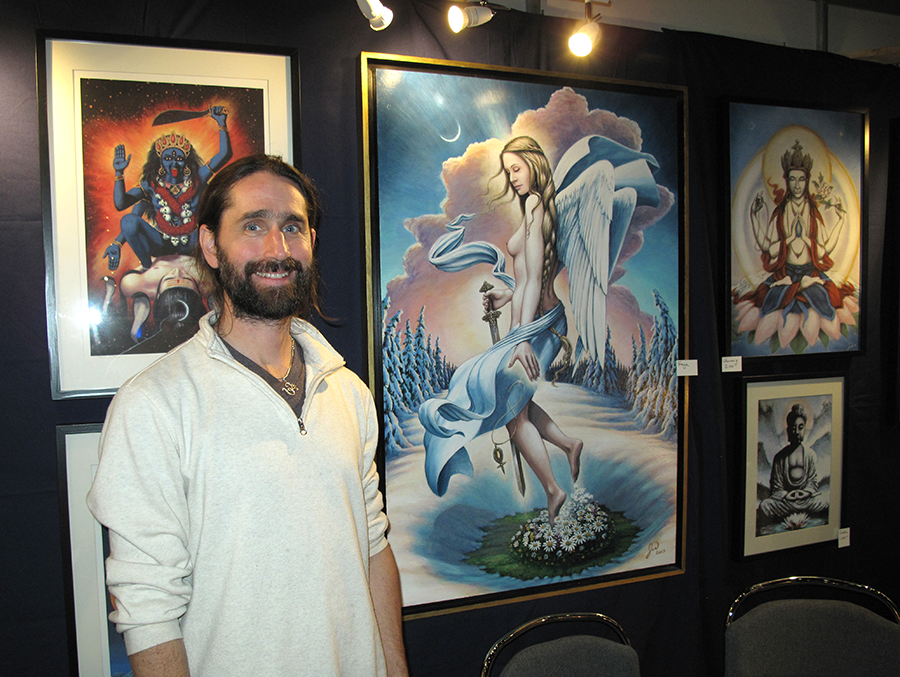 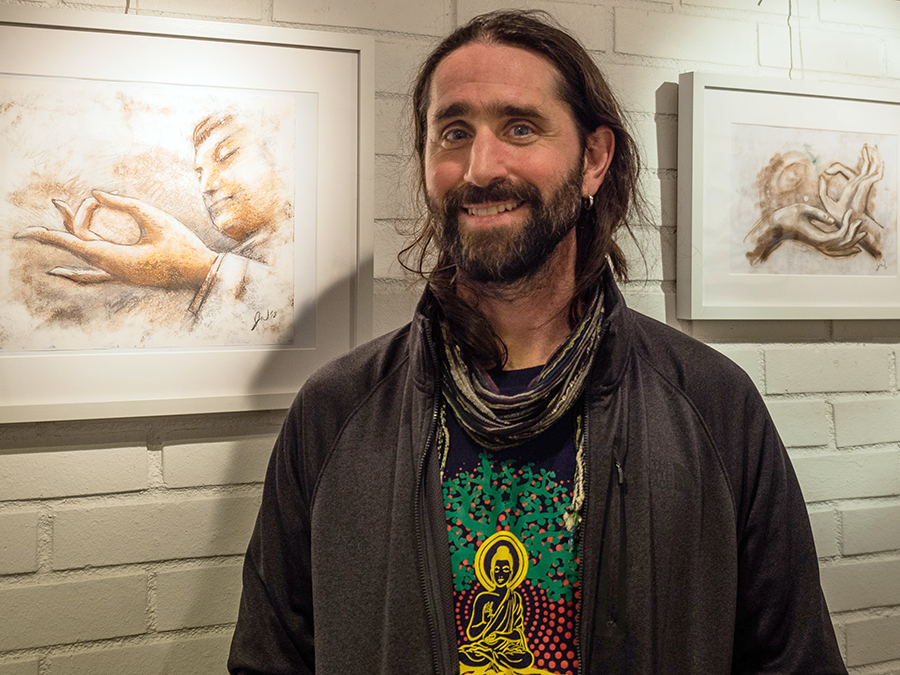 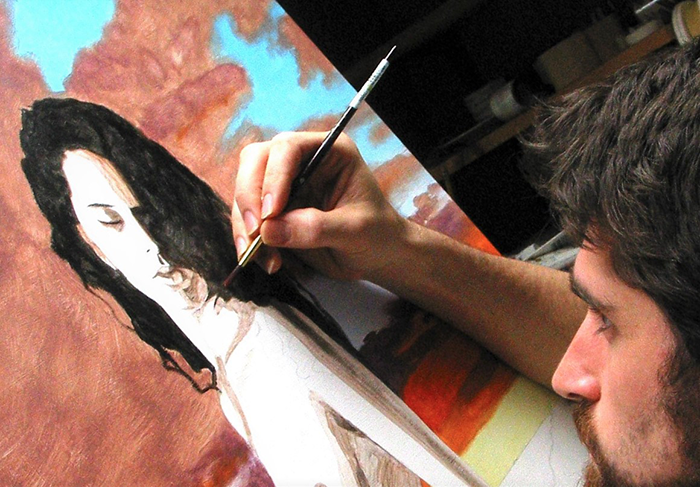 I believe that art is a way of exploring meaning in life, and my art is an exploration of the sacred. I paint divine archetypes to inspire a recognition of those qualities within us, and I am passionate about translating the wisdom of ancient traditions in a contemporary light.

I come from a family of artists going back five generations. Showing early talent, I started private lessons from my grandfather’s tutor at the age of eight. When I was twelve, I won an international art competition for the Goodwill Games in Moscow. I surpassed the art education in high school, creating my own advanced curriculum, and became the art editor of the school’s creative writing/arts magazine and the editorial illustrator of the newspaper. I graduated with honors from the Mid-Valley Art Council and won the prestigious ‘Marie Walsh Sharpe’ art scholarship to train with professional artists at Colorado College. I went on to study figurative drawing at Willamette University, and painting/illustration at the Pacific NW College of Art.

I felt that I was destined to become an artist. For most of my young adult years I lived in the remote mountains of Oregon developing my own painting style and working as a free-lance illustrator and portrait artist. With the start of my Goddess portrait series, I began showing at festivals and exhibitions, and publishing my work. I gained recognition in the emerging Visionary Art movement of the Pacific NW, exhibiting with pioneering Visionary artists like Robert Venosa and Alex Grey, and my paintings were represented by the Goddess Gallery of Portland. I was featured in the compendium “Feminine Mysticism in Art; Artists Envisioning the Divine,” among other books and publications.

The course of my art took a dramatic turn when I moved from Oregon to Norway, got married and had a child. I struggled to re-establish myself as an artist in the new art world, and my relationship ended in a divorce. The responsibilities of being a single father in a foreign country compelled me to take up employment as a gardener and teacher, and my art was put aside for over a decade. Though my creativity was put on hold for so many years, the experiences of raising a child, integrating into a foreign culture, and becoming a teacher has enriched my life and broadened my perspectives, preparing the ground for a deeper exploration of my art.

After a profound experience in India in my twenties, I had the inspiration to begin painting a series of divine feminine archetypes from around the world. I was looking for direction in my art when I stumbled across the ancient ruins of a Goddess temple, where I found a giant crumbling statue of a many-armed goddess underneath a great tree. The impact of that holy place made me realize how we have lost touch with those qualities, and what the Goddess represents: the connection with the Earth, the sacredness of form, the immanence of the divine in humanity, and compassion for life. With the Goddess series, I sought to renew an understanding and remembrance of these divine feminine archetypes, and to ultimately inspire the awakening of those qualities in ourselves.

My Goddess paintings are a meditation on the archetypes that they represent. Each painting takes many months to complete. I study the history and traditional symbolism of the Goddess, and then contemplate the meaning for weeks to visualize how she may appear. In the end, I hope that each Goddess image becomes a mirror to some aspect of our higher self that is strengthened upon being seen.

I have been inspired by the works of William Blake, Leonardo Da Vinci, and the pre-Raphaelite masters in my approach to painting. Yet much of my early influence comes from the symbolic, mythological, and religious art of different traditions. Yantra art, Thangka painting, and deity paintings from the Hindu and Tantric Tibetan Buddhist traditions have played a significant role in my work. I have always been attracted to art which attempts to personify and express divine attributes.