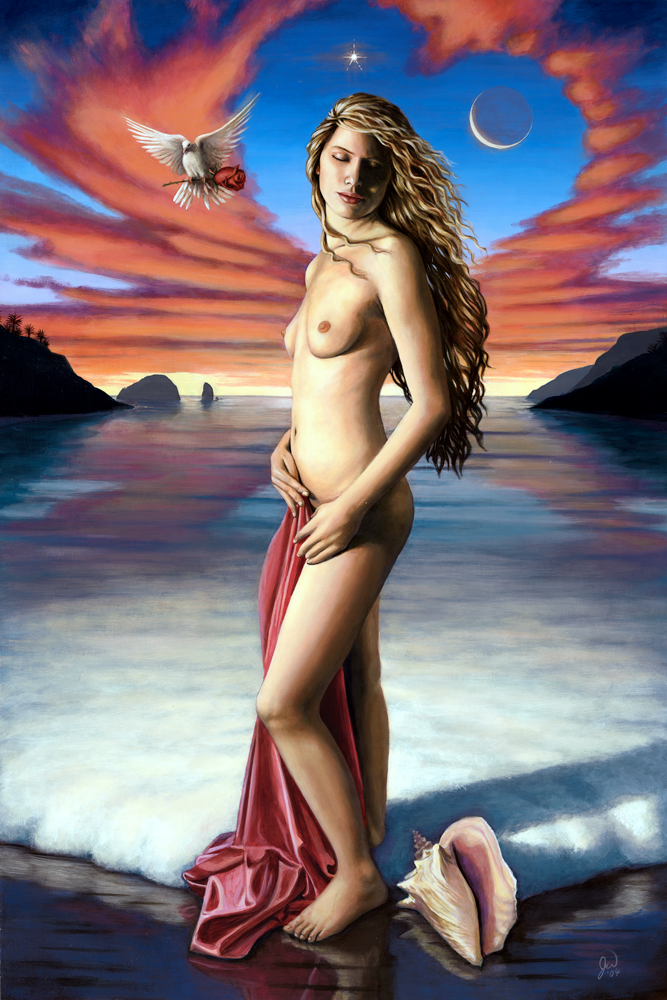 Aphrodite is the Greek goddess of love, beauty, art, and desire. She is full of gaiety, laughter, joy, and exuberance. Her nature is realized when the passions of humanity are experienced as sacred and divine, uniting heaven and earth as a whole.

Golden Aphrodite came to Greece from Cyprus, and before that from ancient Mesopotamia, where she is linked to Ishtar and Astarte. Her history and worship go far back in time, where she is referred to in many regions by various names. The Romans later converted their goddess of gardens and vineyards, Venus, to the attributes of Aphrodite. Eros, the Greek god of passion and sexual love, also known as the Roman Cupid, is her son.

According to Hesiod, the origin of Aphrodite began when the castrated genitals of Uranus (father of the Greek gods) were thrown into the ocean by his son, Cronos. The ocean and genitals began to churn and foam and from this aphros (sea foam) arose the young maiden Aphrodite. She was blown by the west wind Zephyros to Cyprus and Cythera, where the Graces greeted and clothed her divinely beautiful form. Yet she was so magnificently beautiful that all who saw her fell in love, and as it was her nature to love, she loved freely. So Zues married her to a sooty blacksmith god to tame her capricious nature, but not even this bond could contain her, and she betrayed him for other lovers.

In the fourth century BC, Aphrodite came to be known by two distinct aspects: Aphrodite Urania, goddess of heaven, and Aphrodite Pandemos, goddess of the people. As Urania, she inspires a chaste love of spiritual beauty and higher ideals. As Pandemos, she is experienced as the earthly and sensual love between people. The early priestesses of Aphrodite, the Horae, would offer temple prostitution in which sexual intercourse was considered a form of sacred worship. Though the split in her identity was originally to illustrate the different kinds of love, from the sensual to the spiritual, it later became a divisive way to further define the split between sinful and pious behavior.

Her attributes are the falling rain and dew (uniting heaven and earth), the dove, the morning light of dawn, the planet venus (evening star), the amorous goat, the swan, the playful dolphin, roses, crescent moon, sea shells, and pomegranate.