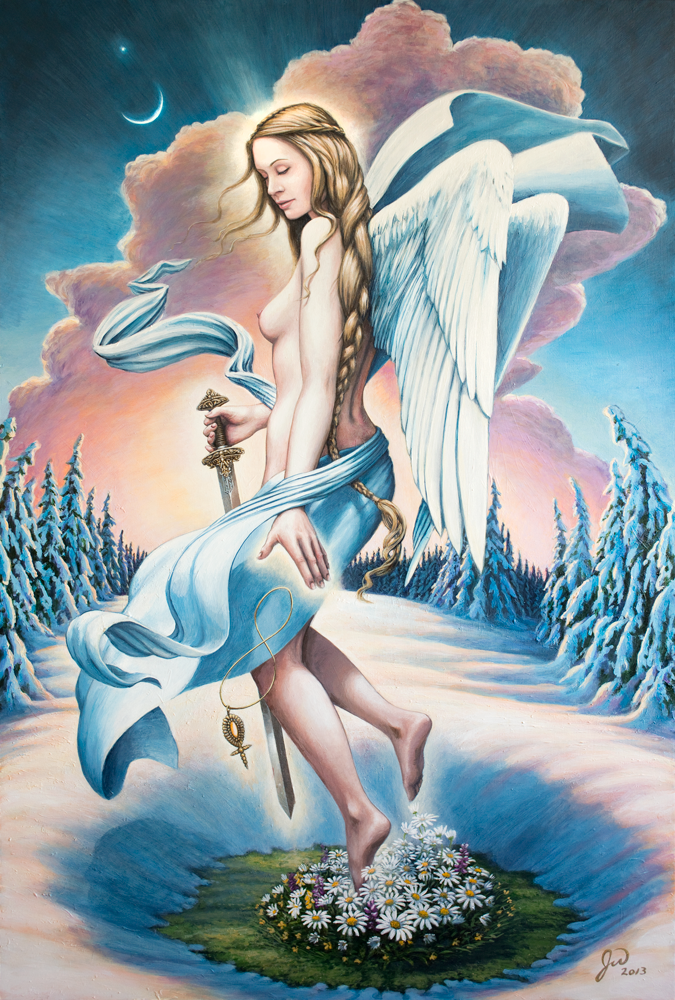 Freya, meaning ‘the Lady,’ is one of the major Goddesses of Norse Mythology.  She is the Goddess of love, beauty, sexuality, fertility, magic, war, and death. In mythology, Freya is the twin sister of Frey, and together they represent the untamed forces of nature. She is one of the Vanir, a group of Gods and Goddesses associated with nature, wild places, and unseen realms.

Often appearing naked with a sword, golden-haired Freya is the most beautiful and desirable woman in the Nine Realms, and no man can resist her. She always wears Brisingamen, a powerful necklace made from gold and amber that she won from the dwarves, master blacksmiths, by sleeping with them. Her sexual nature was not subject to the normal bounds of morality.

Although she had many affairs she loved her husband Od deeply, and when he went missing she cried tears of gold. She set out to find him by transforming herself into a bird with her magical cloak. When she found that he had become an ugly sea monster she remained by his side. When he was murdered, she became enraged with the other Gods and threatened their lives until they gave him a proper place in Valhalla, despite him not dying as a hero on the battlefield. Such was her fierce loyalty.

This fierce side reminds us that she is not just a Goddess of love and beauty, but also a Goddess of war and death. Freya leads the Valkyrie, the Choosers of the Slain. These warrior maidens ride over battlefields on winged horses, taking the souls of the bravest warriors killed in battle to feast in Valhalla, Odin’s Hall. Freya claims half of the warriors for her own hall in Folkvang, where she honors and hosts them.

The Northern Lights were originally thought to be caused by her traveling through the night’s sky with the Valkyries.

Freya is also associated with magic and divination. She taught magic to Odin in return for knowledge of the Runes. She is the ruling Goddess of the female ancestral beings known as the Disir that can be called upon for guidance and to see into the future. Her magic is termed Seidr, which includes shape shifting and astral projection. She owned a magical cloak made of falcon feathers that enabled her to fly and move between dimensions. In modern times she has also become associated with the fairy or spirit realms, as she is able to travel to all of the nine worlds in Nordic cosmology.

Because of their grace, beauty, and fierce nature when provoked, all kinds of cats are particularly sacred to Freya, especially the elusive lynx.  Some believe that cats journey to Folkvang after death, spending their afterlives frolicking in the fields around her hall.

As a fertility Goddess she is linked to the moon. A passionate lover, she is fond of romantic music and flowers arrangements. Her passion and love brings men and women together, helping to continue the endless cycle of birth and death, represented by the symbol of the ankh in her medallion. This symbol also hints at her potential influence from the early Goddess cults of Isis, and the traits they shared.