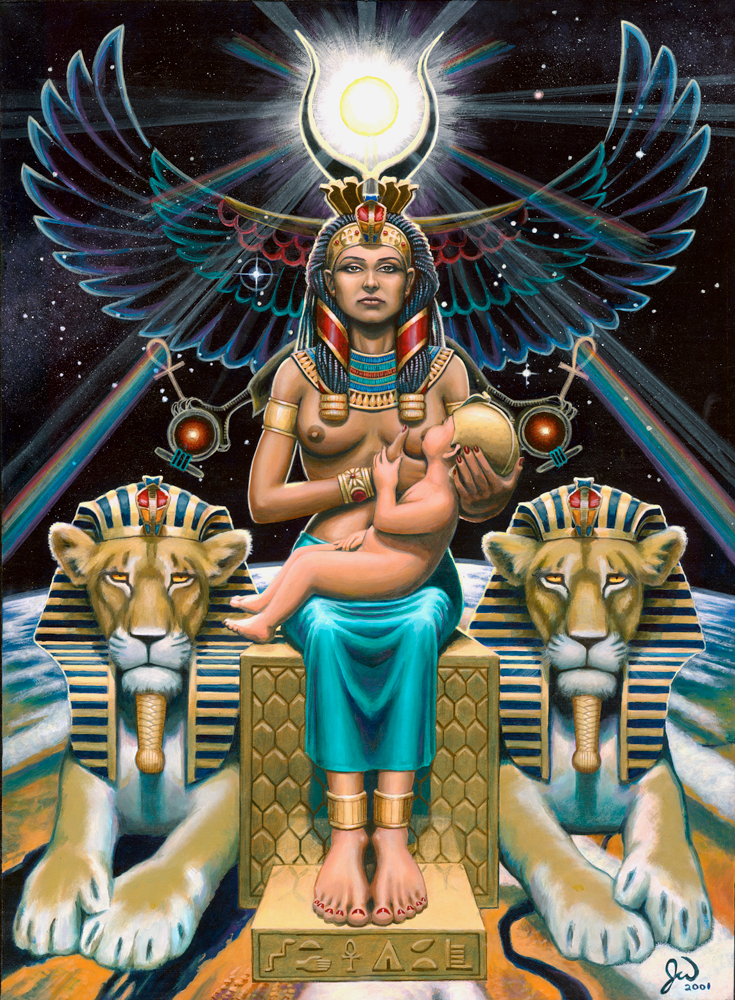 Isis, or Au Set, is an ancient Egyptian Goddess whose worship can be traced back over 5,000 years ago. For 3,000 years her popularity grew, subsuming the roles of other goddesses, until she permeated the rising Roman Empire all the way into Europe. But in the 2nd century AD, the Roman Catholic Church eliminated all public worship of Isis, replacing her image with the icon of Madonna and child.

The story of Isis is full of suffering and reconciliation. Together with her husband Osiris, she ruled the first civilization of people, until their evil brother Seth murdered Osiris to reign in his place. She brought him back to life and conceived their child Horus, but again Seth murdered Osiris, this time cutting his body into 14 pieces and scattering them afar. She left her throne to recover the parts, eventually piecing his body together so that his soul would rule in the Netherworld. She raised their son Horus in secret, and he eventually rose to subdue the evil Seth and free their people. Even after all Seth had done, Isis released him, understanding his place in the great order of things.

She is represented here as the Queen of Heaven and Earth. She is also called the ‘Green Goddess’ and ‘Lady of Life’, to signify the fertility of the earth. She is a symbol of protection and devotion, mother of the savior king to be. She wears the cow horns of Hathor, and the solar disk of Ra. The power of Ra is concentrated through the uraeus (spitting cobra) on her headband and embodied as the lions. She is viewed as the Dog Star, or Sirius, the brightest star in the sky, and her husband is the constellation Orion. The writing on her throne reads “Isis who gives eternal life.”

Her son Horus, who suckles from her breast, represents all of humanity, and our dependence on the Mother for sustenance and life.