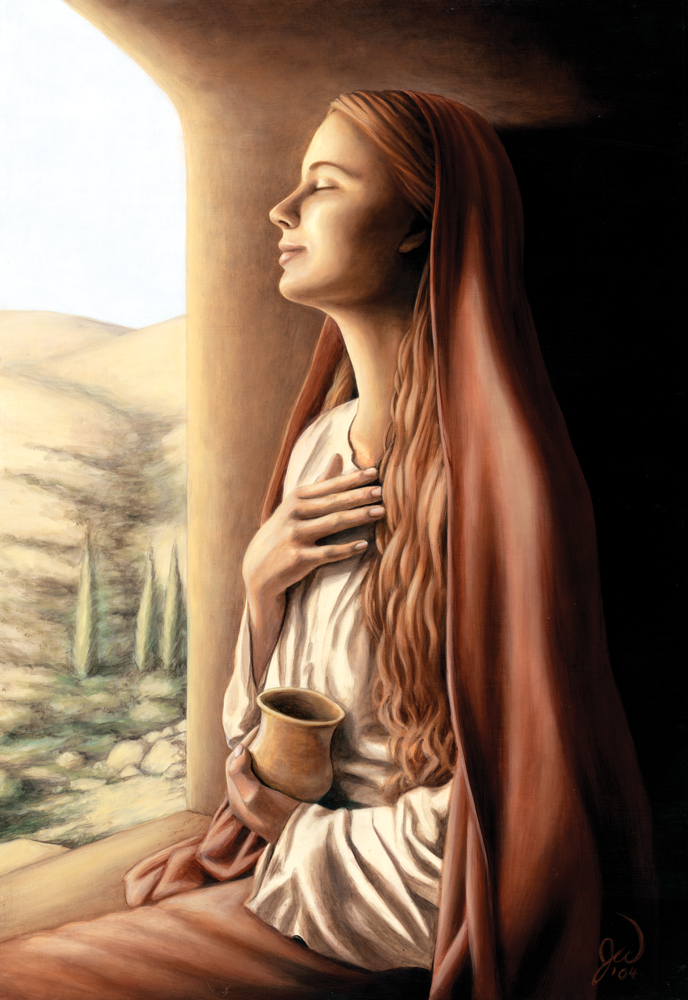 There is little information available to us today about the life of Mary Magdalene, which makes it difficult for modern seekers to understand her nature. From the New Testament we can see that she was a disciple and follower of Jesus, was present for his crucifixion on the cross, a witness to his resurrection, and the first to be given the message and “good news” of Christianity.

The role of prostitute was attributed to her by Pope Gregory in the 6th century, but was recently cleared by the Catholic Church as a mistaken identity. Still, the image of her as a reformed prostitute, or whore, is prevalent in many faiths. It was written that Jesus drove seven devils from her, and that she came from a depraved state. In this way, she represents the possibility of achieving an exalted state, even from a place of such darkness. It may also refer to a more esoteric approach of purifying the seven energy centers, chakras, or clearing the seven vices.

There are many theories around the life of Mary and surviving folklore suggests a possible marriage or sexual union with Jesus. Though the idea is both possible and appealing to many, there is no real evidence yet to prove it. There are instances in the Gnostic writings, however, where she and Jesus are said to have kissed on the lips often, and that she was more loved by him than any of the other disciples. It seems clear that she enjoyed a close relationship with Jesus,which makes it all the more intriguing and important to understand what her place in history truly was.

“The Gospel of Mary,” first unearthed in 1896 and again in the Nag Hammadi find, offers new insight into the role of Mary as a chief disciple of Jesus. She was privy to esoteric teachings that none of the male disciples were taught. It also reveals the gender tensions between Mary and the other disciples, especially Peter. Most modern scholars agree that there was a deliberate attempt to cover-up the true significance of Mary’s role in the early formation of Christianity. The repeated subjugation of her character seems to have been politically and gender motivated, and the importance of her role in the life of Jesus and her contributions to his legacy was written out of the bible.

She is seen in this painting at the tomb of Jesus, where she had come to anoint his body with oil, represented by the jar. She places her hand over her heart, where she feels her connection and devotion to Jesus. Having witnessed his painful and tragic crucifixion, and now realizing his ascension into the kingdom of heaven, she is immersed in the rapture of profound sadness and joy. As portrayed by the contrast between dark and light, she has come from a place of great suffering to realize the glory and greatness of spirit everlasting.

This painting is dedicated to my father, whom originally prompted me to paint this image, and provided me with much of the material I used to create the portrait.